Best Horror of the Year 8 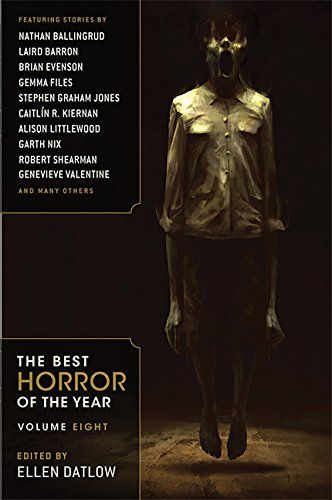 One other thing I neglected to mention, due to my year away, was that my story from the 11th Black Book of Horror, Lord of the Sand, was selected by Ellen Datlow for the latest Best Horror of the Year. This marks my third appearance in there, and it’s a feeling that I never quite get used to. Especially when I look at the other writers on the table of contents and realise how fortunate I am to be listed among them –

We Are All Monsters Here by Kelley Armstrong
Universal Horror by Stephen Graham Jones
Slaughtered Lamb by Tom Johnstone
In a Cavern, In a Canyon by Laird Barron
Between the Pilings by Steve Rasnic Tem
Snow by Dale Bailey
Indian Giver by Ray Cluley
My Boy Builds Coffins by Gary McMahon
The Woman in the Hill by Tamsyn Muir
Underground Economy by John Langan
The Rooms Are High by Reggie Oliver
All the Day You’ll Have Good Luck by Kate Jonez
Lord of the Sand by Stephen Bacon
Wilderness by Letitia Trent
Fabulous Beasts by Priya Sharma
Descent by Carmen Maria Machado
Hippocampus by Adam Nevill
Black Dog by Neil Gaiman
The 21st Century Shadow by Stephanie M. Wytovich
This Stagnant Breath of Change by Brian Hodge

I’d like to say a huge thank you to Ellen Datlow for taking the story, and to Charles Black for publishing it originally.