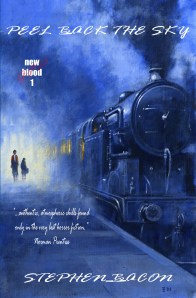 Peter Tennant was kind enough to review my debut collection in issue 32 of Black Static, the UK’s best horror magazine.

I was a little anxious about what he would say. He’s a seasoned reviewer, he knows his stuff better than most, and I realised he would tell it like it is. In other words, I was not going to be able to pull the wool over this eyes. His honesty and integrity are second to none.

So it was doubly pleasing to have him say some nice things about the book. He describes it as “a very impressive first collection, one in which there are no duds at all, and confirm the arrival of a talented newcomer in horror circles.” Which was incredibly thrilling to hear.

The book was also very favourably reviewed in depth by Robert Morrish on his Twilight Ridge website where he says “Overall, Peel Back The Sky is an impressive debut, for both Bacon and the New Blood imprint. The variety of the contents means there’s likely something here for every reader.“