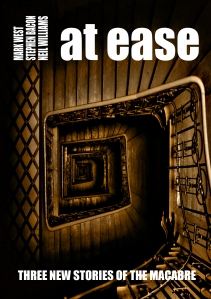 ill at ease is an e-chapbook collection from PenMan Press, available now from Amazon and Smashwords. Combining the talents of Stephen Bacon, Mark West & Neil Williams, ill at ease showcases three new tales of the macabre.

Waiting For Josh, by Stephen Bacon
Pete Richards returns to his hometown for the first time in years. His childhood pal is dying, and Pete realises he must face the past and confront some ugly truths if he is to fulfil his friend’s dying wish.
But the events of their childhood would prove to hold far more darkness than he’d ever imagined.

Come See My House In The Pretty Town, by Mark West
When David Willis travels to the picturesque village of Hoelzli, for a reunion with his old college friends Simon & Kim Roberts, he expects a weekend of laughter and reminiscing. But on a visit to the local fair, he manages to lose the Roberts’ seven-year-old son Billy and things take a decided turn for the worse.

Closer Than You Think, by Neil Williams
Dave is a loving family man, with a keen eye for a bargain. So when he spots a brand-new-looking child seat in a skip at the local tip, he decides to take it. After all, he needs one in his car to ferry his daughter around. But then he starts to notice things that seem otherworldly yet still familiar.
Could it really be an unquiet spirit, the echo of some past tragedy?
Or is it something else? Something that is much closer to home?

‘Here are three writers with singular voices who have, nevertheless, somehow managed to merge their talents to imbue the whole of this slim collection with a kind of menace that is like oil on skin: difficult to remove and persistent. For relative newcomers to show such restraint, to trust in the subtle and the unsaid, is rare indeed. ill at ease is a treat, and I hope it finds many readers.’
Conrad Williams, British Fantasy Award winning author of One and Loss Of Separation

“Childhood memories, a seemingly idyllic English town, a car seat found in a skip… The three chilling tales from ill at ease ably demonstrate that horror can be found in the most mundane places, and a sense of unease is always much closer than we think.”
Gary McMahon, author of Pretty Little Dead Things and The Concrete Grove

The book is available from Amazon – click the title below:

The collection is also available, on a range of formats, from Smashwords.

Don’t have a Kindle? No problem, Amazon provide a range of free app’s that allow you to read them on whatever device you might have: